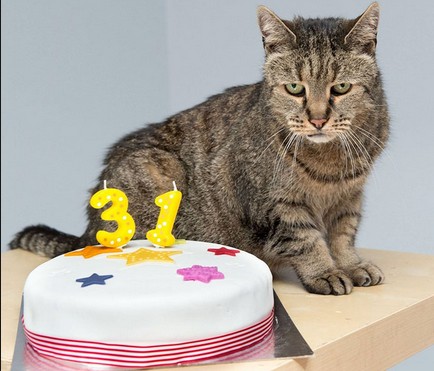 The world’s oldest cat has died at the age of 32 after dying as a result of heart failure.

When Nutmeg the Tabby was born, Margaret Thatcher was still on the throne and the Queen was just 30 years into her reign.

When he first came to the nation’s attention as being a challenger to the mantle of oldest cat in the world he had three teeth, no longer ventured outside, but was still going strong.

His owners Liz and Ian Finlay, who cared for him for 27 years, said that the secret to their cat’s long life was to spoil him rotten with treats such as tuna, cream and hot roast chicken.

His health took a turn for the worst a few weeks before his death on August 29. Liz and Ian admit they have been left ‘absolutely heartbroken’ by his death.

Nutmeg was 32-years-old, that is 144 in cat years. The average lifespan of a cat is just 15, which means Nutmeg has surpassed his life expectancy by over 100 per cent.