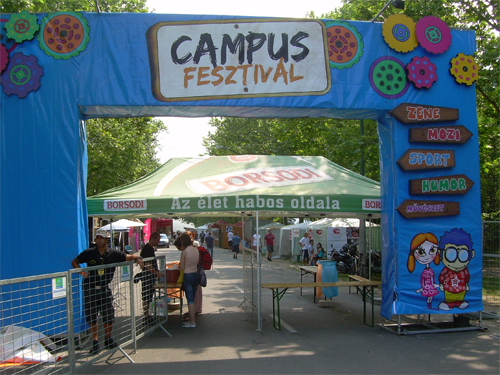 From 25th July the stadium of Nagyerdő will be filled with partying youth. The elite of Hungarian musicians, as well as foreign stars will give concerts.

A press conference was held on Wednesday,  where László Lukács, singer of the band Tankcsapda, said that this years’ show will be much better than last years’ was. Lajos Kósa, mayor of Debrecen was also present at the conference; he is satisfied with the line-up of the festival, since there are a lot of bands from Debrecen.

Péter Miklósvölgyi, the chief organizer of the festival, talked about the difficulties that came up in past five years. He also said that this years’ program was not easy to organize, however it turned out to be a festival of high standards.

Campus Festival’s popularity broke a record last year, therefore the festival is intended to be an attraction of tourism. The festival is among the biggest entertaining events of Debrecen. “We would like if people of every age, youngsters and elders would enjoy the festival, so we were trying to organize a line-up for everyone’s taste” – Said András Süli, programme organizer.

The organizers of the festival are trying not to bother those who live nearby the stadium, what is more, they can buy tickets preferentially.

Concerning the line-up, one of the main attractions is the Finnish band, Apocalyptica. Several foreign musicians with several kinds of music will entertain the audience, for instance N.O.H.A. (CZ-BR-USA-D), Matrix & Futurebound (UK), The Real McKenzies (CAN).

Besides concerts, University of Debrecen will represent itself with a special program. There will be a ‘district’ on the festival where the audience is informed and entertained with programs about the peoples of Europe, their habits, specialities; for example their own kind of music, dances and literature. The district is called European Languages and Cultures.

The Campus Olympics is another particular program; according to the organizers there will be about 900 participants. Only those can enter who are students of the university.

The festival is scheduled from 25th to 29th July.