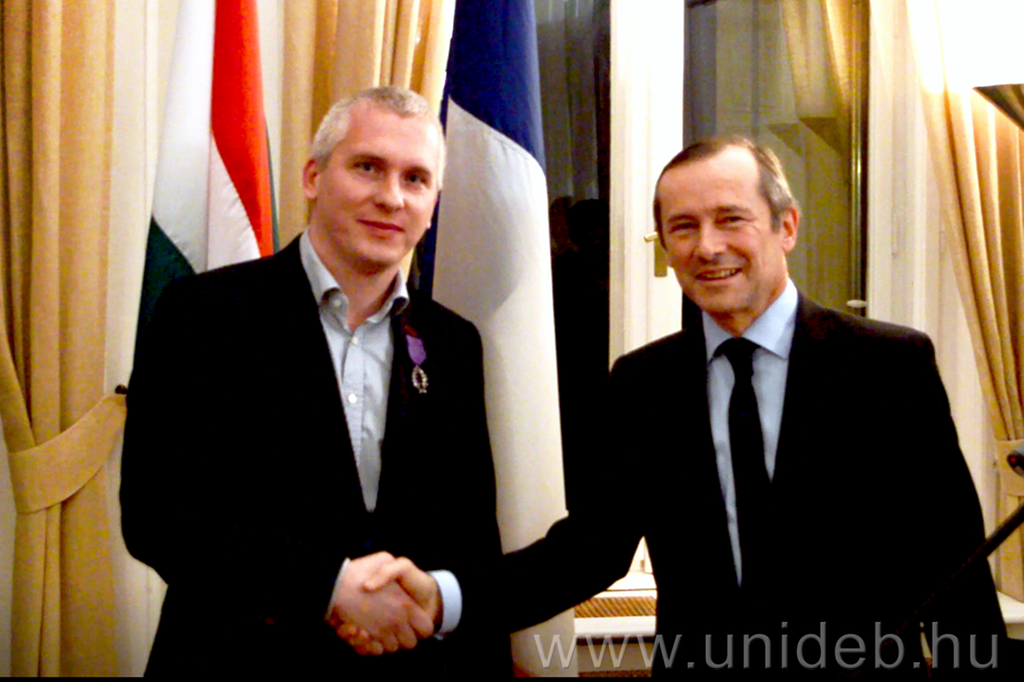 Éric Fournier, Ambassador of France to Hungary, awarded Péter Bay, associate professor at the Department of Medical Chemistry of the University of Debrecen, the title of Knight of the Order of Academic Palms (Ordre des Palmes Académiques) of the French Republic.

Péter Bay received the prestigious national award in recognition of his high-quality research and his close cooperation with French academic life. At the ceremonious occasion of awarding the title, Éric Fournier, the French ambassador in Budapest, expressed his appreciation for the role that Péter Bay has played in the various programmes of the Embassy of French as well as in the movement of the organisation “France Alumni”.

The associate professor of the Department of Medical Chemistry at the Faculty of General Medicine graduated from the University of Debrecen as a biologist in 2000, received his Ph.D. from the same university in 2004, and became habilitated there in 2012. He received his Doctor of the Academy (D.Sc.) degree in 2014. He spent two years at the University of Strasbourg as a postdoctoral fellow. He is a participant of the “Lendület” (Impetus) programme of the Hungarian Academy of Sciences, as well as several GINOP (Economic Development and Innovation Operational Programme) projects. In addition, he is the winner and supervisor of several OTKA (Hungarian Scientific Research Fund) grants. The illustrious researcher is the author of 57 scientific publications: his research includes, the connections between tumours and the microbiome, as well as aimed at a better understanding of metabolic diseases.

The Order of the French Academic Palms was created by Napoleon in 1808, and is awarded by the French government to recognize excellence in education. The award is fundamentally awarded to those who have rendered eminent service to French language and culture. The Order of the French Academic Palms is the oldest currently existing decoration awarded only to civilians. Since 1955, not only French nationals are eligible to the grades of Chevalier (knight), Officier (officer) or Commandeur (commander) of the Order, but also faculty members of universities outside of France.