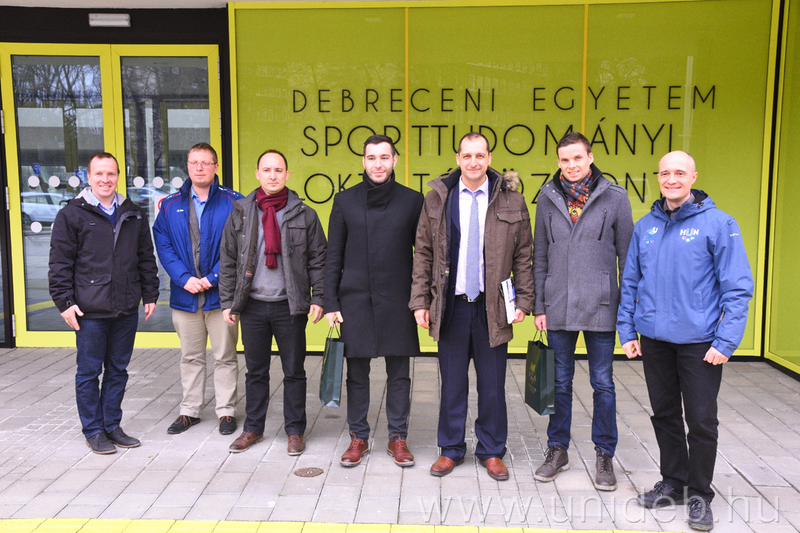 The University of Debrecen and the University of Miskolc have submitted a joint bid to host a European-level sports competition. The cause of hosting European University Games is also supported by the Hungarian government. The decision makers have already inspected the relevant locations recently.

A delegation representing the organization European University Sports Association (EUSA) paid two evaluation visits between February 11th and 16th, assessing the sports facilities as well as the available accommodation and catering facilities, such as hotels and restaurants, in both cities.

At the technical evaluation on February 12, Besim Aliti, EUSA Sports Manager, and Assistant Davor Travnikar underlined that the sports facilities comply with the requirements of EUSA, while there is no need to implement any facility development in Debrecen, and Nagyerdei Stadion [Big Forest Stadium] is an appropriate location for holding the closing ceremony, which is planned for the same date as the opening day of Campus Fesztivál. Regarding Miskolc, they emphasized the fact that it was an excellent plan, which fully corresponds to the spirit of EUSA, that a European Games village would be formed out of the dormitories located at the same place, a significant portion of which would be upgraded in the upcoming 2 or 3 years. There are also going to be several investments into sports that would be implemented independently of the games, the most important of which is the reconstruction of Diósgyőri Stadion [Diósgyőr Stadium], where the opening ceremony is to be held.

Following the evaluation visits, the leaders of the EUSA Evaluation Committee also came to Hungary on February 15th and 16th. President Adam Roczek, Vice- President Haris Pavletić, and General Secretary Matjaž Pečovnik had a very favorable opinion about the bid.

“I believe that both cities and both universities are fully committed to implement the bid. In addition, both locations are genuine university cities, which dispose of the best infrastructure to hold the individual events. Among the facilities we have seen, I found Nagyerdei Stadion to be the most convincing and imposing,” said Adam Roczek, President of EUSA.

The bid to host the 6th European University Games in 2022 or in 2024 was submitted in January 2018 jointly by the University of Debrecen and the University of Miskolc. The bid is supported by the municipal governments of the two cities, Magyar Egyetemi-Főiskolai Sportszövetség (MEFS) [Hungarian University Sports Federation], the Hungarian federations of individual branches of sports, and the government of Hungary, as well (Government Decree 1050/2018. (II.20)).

“No sport event of this size and kind has been hosted in Hungary yet. This is multi-sport event, where competitors in 13 branches of sports and two demonstrative branches of sports are expected to participate from as many as 40 countries and between 400 and 500 universities. If the decision is in our favor, we can count on about ten thousand participants altogether, including the athletes, attendants, organizers, and volunteers,” said László Balogh, the Director of Debreceni Egyetem Sporttudományi Koordinációs Intézete [Sports Science Coordination Institute].

According to the plans, in July of the given year, students would match their skills and abilities in the two cities during a period of two weeks. Debrecen would host B3x3, badminton, futsal, handball, volleyball, judo, and beach football, while Miskolc would take care of basketball, football, table tennis, tennis, karate, and orienteering. As part of the additional program, there would be scholarly-scientific conferences and rectors’ conference, together with other educational, professional, and cultural events, including, for example, Campus Fesztivál.

For hosting the 6th EUG, besides Hungary, the city of Lodz in Poland is also bidding. The final decision on the next European Universities Games organizer will be made in Madrid on April 13, 2018.
Press Office, unideb.hu