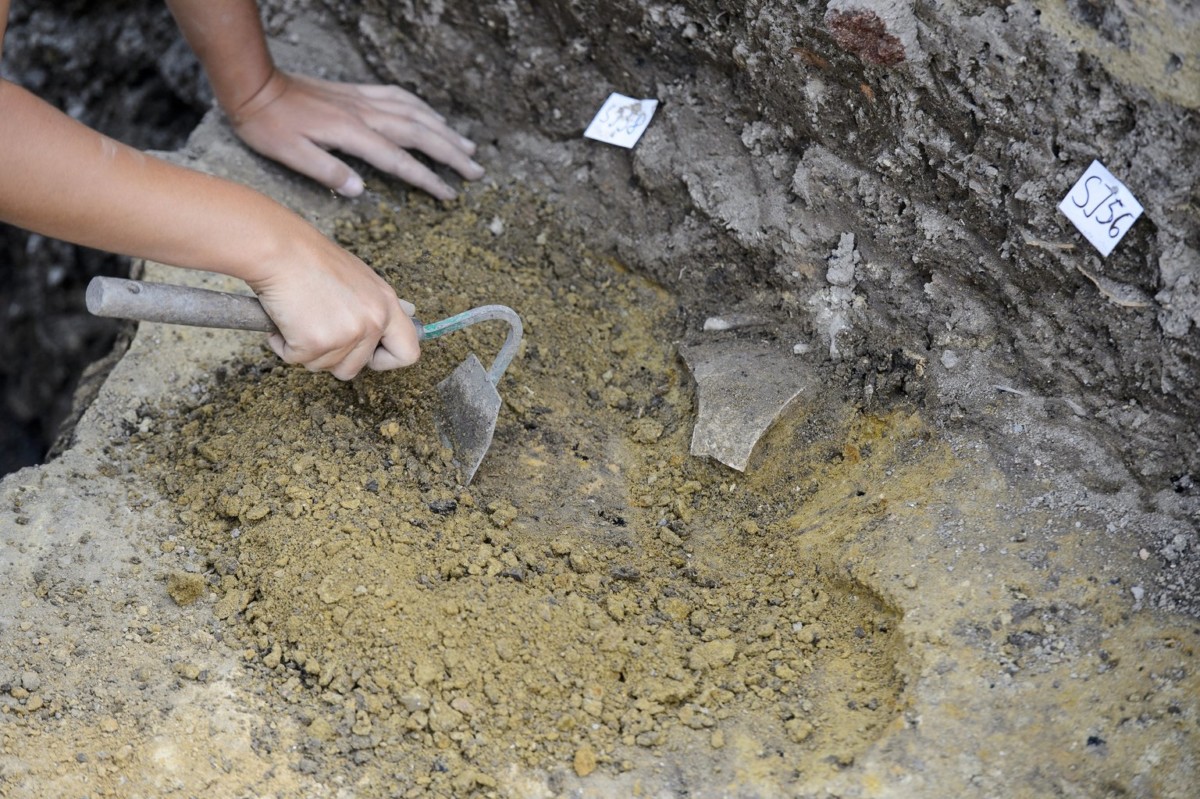 An unprecedentedly vast Neolithic settlement — the largest ever discovered in Israel and the Levant, say archaeologists — is currently being excavated ahead of highway construction five kilometers from Jerusalem, it was announced on Tuesday.

The 9,000-year-old site, located near the town of Motza, is the “Big Bang” for prehistory settlement research due to its size and the preservation of its material culture, said Jacob Vardi, co-director of the excavations at Motza on behalf of the Antiquities Authority,

“It’s a game changer, a site that will drastically shift what we know about the Neolithic era,” said Vardi. Already some international scholars are beginning to realize the existence of the site may necessitate revisions to their work, he said.

“So far, it was believed that the Judea area was empty, and that sites of that size existed only on the other bank of the Jordan river, or in the Northern Levant. Instead of an uninhabited area from that period, we have found a complex site, where varied economic means of subsistence existed, and all this only several dozens of centimeters below the surface,” according to Vardi and co-director Dr. Hamoudi Khalaily in an IAA press release.

Roughly half a kilometer from point to point, the site would have housed an expected population of some 3,000 residents. In today’s terms, said Vardi, prehistoric Motza would be comparable to the stature of Jerusalem or Tel Aviv — “a real metropolis.”

According to an IAA press release, the project was initiated and financed by the Netivei Israel Company (the National Transport Infrastructure company) as part of the Route 16 Project, which includes building a new entrance road to Jerusalem from the west running from the Route 1 highway at the Motza Interchange to the capital.

According to co-director Khalaily, the people who lived in this town had trade and cultural connections to widespread populations, including Anatolia, which is the origin for obsidian artifacts discovered at the site. Other excavated material indicate intensive hunting, animal husbandry, and agriculture.

“The society was at its peak” and appeared to increasingly specialize in raising sheep, said Khalaily.

In addition to prehistoric tools such as thousands of arrowheads, axes, sickle blades, and knives, storage sheds containing large stores of legumes, especially lentils, were uncovered. “The fact that the seeds were preserved is astonishing in the light of the site’s age,” said the archaeologists.

Alongside utilitarian tools, a number of small statues were unearthed, including a clay figurine of an ox and a stone face, which Khalaily joked was either a human representation “or aliens, even.”

In the ancient, unrecorded past as well as today, the site is situated on the banks of Nahal Sorek and other water sources. The fertile valley is on an ancient path connecting the Shefela (foothills) region to Jerusalem, said the IAA. “These optimal conditions are a central reason for long-term settlement on this site, from the Epipaleolithic Period, around 20,000 years ago, to the present day,” according to the press release.

“Thousands of years before the construction of the pyramids, what we see in the neolithic period is that more and more populations turn to live in a permanent settlement,” said Vardi. “They migrate less and they deal more and more in agriculture.”

Among the architecture uncovered in the excavation are large buildings that show signs of habitation, as well as what the archaeologists identify as public halls and spaces used for worship. In a brief video published by the IAA, archaeologist Lauren Davis walks a narrow path between remains of buildings — a prehistoric alleyway. “Very much like we see in buildings today, separated by alleys between,” said Davis.

According to the archaeologists, this alleyway is “evidence of the settlement’s advanced level of planning.” Likewise, the archaeologists discovered that plaster was sometimes used for creating floors and sealing various facilities during the construction of the residents’ domiciles and buildings.

In addition to signs of life, the archaeologists uncovered several graves. According to Davis, in the midst of a layer dating to 10,000 years ago, archaeologists found a tomb from 4,000 years ago. “In this tomb are two individuals — warriors — who were buried together with a dagger and a spear head,” she said.

“There’s also an amazing find,” said Davis, “which is a whole donkey, domesticated, that was buried in front of the tomb probably when they sealed it.” Added Vardi, the donkey was apparently meant to serve the warriors in the world to come.

According to Amit Re’em, the IAA’s Jerusalem District archaeologist, despite the roadworks, a significant percentage of the prehistoric site around the excavation is being preserved and all of it is being documented.

Each architectural structure is being documented through 3-D modeling. “When we finish the excavation here,” said Vardi, “we will be able to continue to research the site in the laboratory,” adding that this is unprecedented use of technology.

“In addition, the IAA plans to tell the story of the site at the site by means of a display and illustration. At Tel Motza, adjacent to this excavation, archaeological remains are being preserved for the public at large, and conservation and accessibility activities are being carried out in Tel Bet Shemesh and Tel Yarmut,” announced the IAA release.