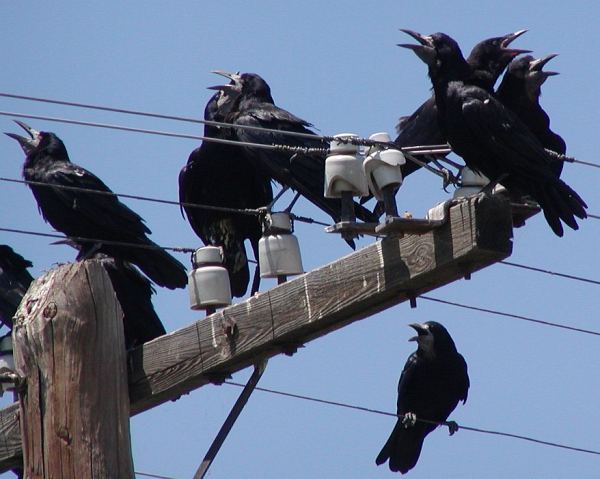 The local population got used to it that a loads of rooks appears from mid-October in Debrecen. There were years when more rooks were in the city than human residents. The first birds arrived in groups staying until March.

The rook belongs to the crow species and one of the most famous and numerous sub-species the rooks. They arriving every autumn in masses. From mid-October until mid-March spending the winter in Debrecen and Great Forest.

Their number varies from year to year, but it was a year when more than
200 000 rooks were wintering in Debrecen. The sowing crows nest in colonies, huge colonies around locust and oak forest areas in the lowland
plains but also prefer big cities like Kecskemet, Szombathely, Gyor.

The vast majority of rooks are not from Hungary but coming from Poland and Ukraine. They arriving to escape the harsh weather conditions in the Carpathian Basin. In their home the winter is too cold and after big
snowing they are not able to find food. An estimated 3-4 million rooks wintering in Hungary, this stock which is visiting Debrecen only a fraction of them.

The rooks set out an agenda so everyday they gatheri and fly 200 yards wide air corridors over the city and withdraw to the border to get food.

The rooks are sowing the mixed diet, but most of their food is vegetables,
seeds etc. On the abandoned fields they easily find food, the later sowings, everything is included with loads of food for them. If they find died animals they often eat meat but never been reported that they attacked humans.
Rooks do not pose a threat but it is not advisable in any event to touch the sitting or wounded ones or take home their dead bodies.