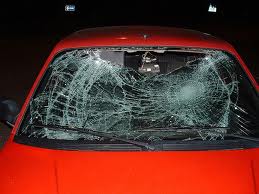 A 33 year old woman from Debrecen was standing on the green area between the sidewalk and the road in Péterfia Street and she threw a stone towards the road. The stone hit a moving car and broke its front windscreen but nobody got hurt. The driver got out of the car and asked the woman if she was the one that hit the car. Using vulgar words, she answered in the affirmative. When the driver asked her why she did that, she became aggressive and asked the driver to hit her but he said he would call the police instead. The woman reacted by hitting him in the face once and then left the scene. The police found her in an abandoned building in Péterfia Street and took her to the police station.
At the interrogation, the woman admitted having thrown a stone at the car but she denied having hit its driver. She also said she didn’t want to cause damages or endanger the life of anyone but she couldn’t give an explanation for her actions. Proceedings were initiated against her for endangering road safety and for committing other crimes.