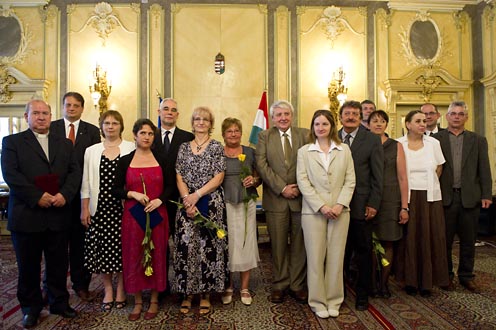 András Berényi, chief of the Mental Hygienic Program of University of Debrecen, was granted in Ministerial Commendation on the occasion of UN’s International Anti-drug Day.

András Berényi psychiatrist, as an appreciation for his results in drug prevention and caring, has received Ministerial Commendation on 26th June, Budapest.

“There is help, there is a way out from the daedal of drugs” – emphasized Zoltán Balog, Secretary of Human Resources. On the occasion of International Anti-drug Day, rewards and professional acknowledgements were granted for those, who have fought prominently in the anti-drug battle. Experts and organizations in the scientific, social and hygienic fields were rewarded.

The new anti-drug strategy will be introduced to the government in the second half of this year. “As the necessities are concerned, a plan is needed, just as people who do the work. The co-operation between administration and members of the society is crucially important. The Ministry of Human Resources grants these rewards to thank the foregoing efforts” – said Zoltán Balog.