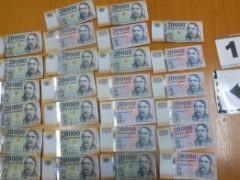 A 27-year-old local woman goes on trial for stealing more than 1,5 million Forints from the cash register.

A security guard called the police on 7 November 2016 that one of the employees, a cashier, stole a large amount of money from the cash register of a supermarket located on Csapó Utca, Debrecen. The woman should have put the money into the safe; instead, she tried to steal it. The woman was taken to the Debrecen police station, where a procedure was initiated against her on reasonable suspicion of theft and embezzlement. During the interrogation the woman told the police that she had stolen money 18 times from the supermarket.

Recently, the police have finished the investigation in Katalin O.’s case. Soon, the woman goes on trial.