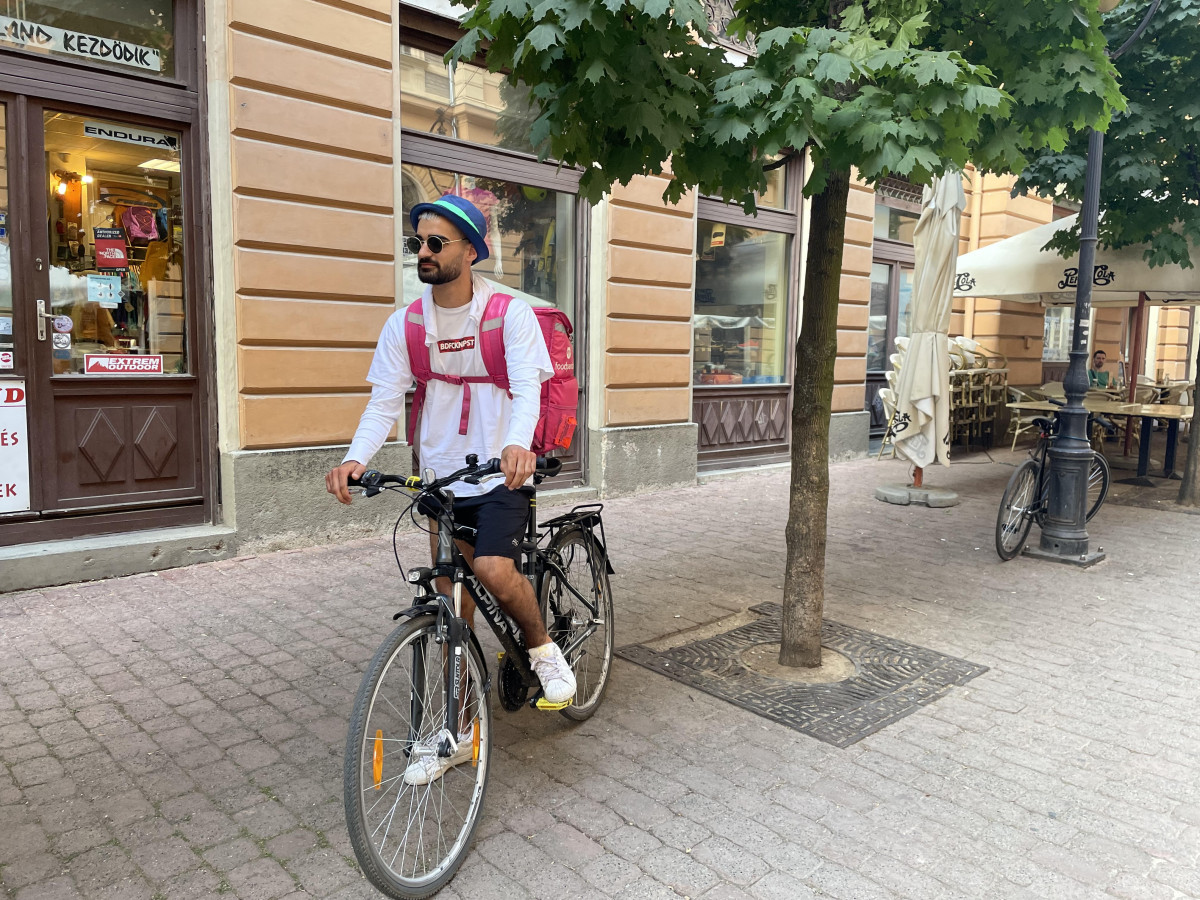 In our column entitled “Thrive in Debrecen”, we interview people who live and work among us, many of us may know them personally or at least have heard of them. They tell about themselves, their lives, and how to make a living and prevail in the city of Cívis. This time, twenty-one-year-old food courier Alex Rácz told us about how to make a living from this job, what inconveniences or even kind words he receives when he delivers food by bicycle and patrols the streets of our city every day.

We see a lot of couriers on the streets, speeding and delivering to homes. Why did you choose this form of earning money?

I came from Kisújszállás and have been living in Debrecen for two years. I started working quite early when I was fifteen years old – as a student job, I was shelling corn in the fields. I love my parents a lot, but it felt better to buy something for myself than to get it from them, so I appreciated things a lot more. Courier work has already started at home, and so has the way of life that comes with this job. Then when I moved here to learn the hairdressing profession – which I have since stopped – then I worked in McDonald’s. But when I saw my salary, I quit the next day. After that, with the help of a friend, I got into Netpincér (now Foodpanda) at the time, where it took me a good month and a half to feel at home and be as fast as when I was working back home. At first, it was difficult to get to know this big city, but since then it’s like home.

Did you choose bicycle delivery?

It’s a bit funny because I could go with a scooter and a car, but the police took away my license because I accumulated penalty points. I have to take the driving exam again in half a year. Unfortunately, it’s not just me, several of my friends have been through the courier service this way. Now I’m forced to ride a bike, which I like, but in this heat, it would be better to use a scooter.

Now I’m afraid to ask this question, but what do you like about your work and what do you not like in addition to the above?

The good thing about it is that I can decide when I work: in the morning or in the afternoon, and also whether I go for a week or skip it. The flexibility itself and not having a boss are priceless. I enjoy being free. But this also has its downside, because I am a slave to myself. I belong to the individual group, which is the best group among couriers, so I can choose my own times when I want to work. For this reason, I have to set myself a schedule for when I go out to run errands, because if I work every weekday and dedicate even the weekend to it, then I can very quickly get burned out. There have been instances where I lost interest in life when I had no time for anything. I just noticed that another month passed without any rest, I just drove the money. It’s a lonely job, that’s why you see all the couriers on the phone, because we have to tell someone else about all this nonsense that hits us every day.

Are there any unpleasant situations?

They happen all the time. The most common one is that people don’t remember ordering something or when they don’t answer the door. They say bad things because they didn’t get what they asked for. It doesn’t matter to them that in this case, it is not our fault, but the restaurant itself, from which the food was ordered. Unfortunately, it also happens that we are not even counted as people, not only the customers but also the people in the restaurant and the people walking on the street.

But please reassure me, pleasant things happen to you too?

Of course, there are some good things. It can be very good, for example, when someone tells me to take care of myself, and also when they come down from the fourth floor to the second floor. Because sometimes I go out to thirty or forty addresses a day and take the stairs all day. If they take the time to get tired and come down for food, that’s a huge thing for me.

And speaking of kindness, what is the proportion of people who tip?

If I look at an average, which means about forty deliveries per day, and if they only gave me fifty forints, either online or in cash, I could have lunch with it. But this is often not the case. Yesterday, for example, I received eight hundred forints and I worked for ten hours. I’m not saying they don’t give tips, I respect the exception. But the fact is that those who are in worse conditions, because they seem to live in such an environment, give more than those who order tens of thousands of forints from well-known restaurants and live in a wealthy place, but they don’t tip. In fact, they sometimes even ask me why I’m late? The more modest tip may also include the fact that many people think we also receive the online delivery fee listed on the site.

Can it be said that mostly the younger age group and boys choose this job?

It requires a lifestyle, and the most important thing is speed. Maybe younger boys can handle it better, but I also see girls and older women who are often better than us. I think it depends on the person, if you like to do it, then you are a happy person.

I see that the number of couriers is increasing as if there are more and more of you. What do you experience, several people order?

The network of restaurants is expanding more and more, and the number of couriers is also increasing. There are about three to four hundred couriers in Debrecen, but not so many people out at the same time. Those who work less or poorly are sitting at home and waiting for us to drop shifts at some point. This is the essence of the classification. Those who are better and faster are ahead, while the “worse” are in the back. Good couriers are always out there, you can usually see them on the streets. That’s why we have that kind of control in our heads to go and do it because if we don’t, we won’t have enough hours, we’ll be relegated, and we won’t be able to earn money. It’s true that they don’t force us to do anything, but it’s still slave labor.

What does your week look like? How many times are you out on the streets?

Sometimes I work six days a week. In summer, there are no car couriers in the morning hours, so I can cover up to six or seven kilometers by bike for an address, but it is not so hot in the morning, so it is a bit more manageable. They don’t dictate how many hours we work, the only thing that matters is what classification we are in. We have to work ourselves in here so we can pick the shifts. The groups are numbered from one to six, we are the ones who have been here for a long time, we know the city, and the small roads better, and we can get to more distant addresses sooner. We have to be pushed out so that the others can get higher as well.

Can you make a living from it, is it enough for your bills, for holidays, for savings?

This job is such that if I work a little, then I don’t earn, if I work a lot, then there is good money. You can make a living from it, and you can even save money. We have a fixed hourly wage and we also have title money, it depends on whether the person is on a bicycle, scooter or car, and thus it increases. The average hourly wage is over HUF 2,000, and you can work hundreds of hours. This makes it easier to calculate. I know that there are people who earn one million forints a month, but that person would have no life. Now I was close to that amount too, I did nothing but sleep and work. I told my girlfriend that I’m going to disappear for a while, and she won’t see me, but I only did this to collect enough money so that we could go on vacation comfortably. Now I’ve taken it back a little because I can see that I’m really burnt out, and that’s really not good.

For how long can you do this job?

I think not for a long time, this is not a long-term job. Those who abide by the rules of only working ten hours a day from Monday to Friday can get away with it for years. Or by having a full-time job and doing it side-by-side, as many people do. I’ve been here for two years, and there are six of us left from the team we started with back then, even though there were a lot of us.

Do you already have a plan for what you’re going to do when you quit?

I played basketball at home, I loved it, I was talented at it, and I imagined my future as an athlete. But a car accident put an end to my plans because my elbow was so badly damaged that I have not been able to stretch my arm since. That way it couldn’t happen. I love to drive, so I want to carpool and pass the taxi test. This plan of mine would have started even sooner if the police hadn’t intervened. But I know I’ll make it happen, it’s just a matter of time because if I really want something, I’ll keep going until I get it.

Was this endurance also necessary to win the Courier Cup?

Yes, that was also important. It was a national-level, one-month competition, and it was held for the first time. The main prize was HUF 100,000 for the team that won the most titles. Dominik Tóti, Attila Fülöp, Ádám Erdődi and I were the winners. We were the fastest. It’s strange because the goal of the courier service was to bring more money home, but for that, we had to work even harder. One of our teammates was out there thirteen hours a day and covered as many kilometers on a bike as the other guy did on a scooter. But we won it and we are proud of it.

If you are already “Thriving in Debrecen”, how is your life here?

I love this city and I feel good about being here. Even when I leave here, I’m just waiting to come back here. I can’t describe why or what I like about it, but it’s good to be here. I have everything here, I am ambitious and I am grateful for what I have.