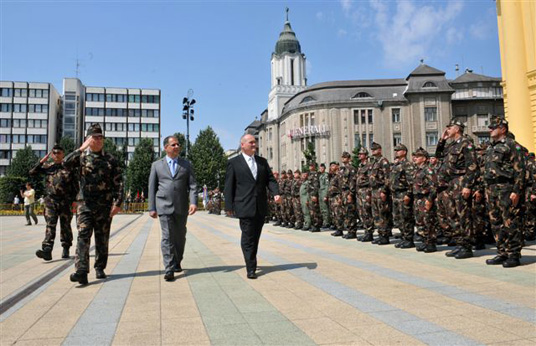 The Hungarian Army has spent 500 million Huf on flood defense. 700 soldiers of the 5. Istvan Bocskai Rifle Brigade took part in the operation saving lives and properties during the flood early June.

Even though they used sandbags to reinforce the dam many houses could not manage to avoid their fate.
They also helped in the evacuation process. Csaba Hende minister of defense arrived on 13th of July to Debrecen and thanked the self-sacrificing efforts of Bocskai Rifle Brigade.
The minister said that the army has to prepare for similar situations to be able to take more effective action.
They have to reorganize the military, law enforcement and public high education system. They will combine the
National Defense University, the Administrative Sciences Department of Corvinus University and the Police College into a new Alma Mater.
He added that defense and officer training students will be mobilized for disaster relief due to the low number of reservists.