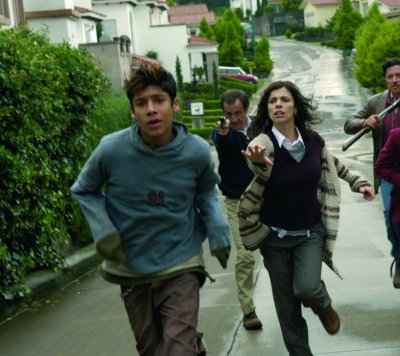 Fonix Event Organizing NPO offers 2-2 tickets to the Spanish Film Night. The event will take place on 16th of April in the Apollo Cinema from 8 p.m to 6 a.m.

The question is the following: Who are the directors of the movie Tapas? If you know the answer just send it to: alexnagy at freemail.hu

The detailed programme of the Film Night:

The film centers on a Spanish tapas bar and the lovelives of the loosely interconnected people in the neighborhood surrounding the bar. The pairs of lovers include a middle aged woman and a young man, an elderly, drug dealing woman and her terminally ill husband in poor health, the tapas bar owner and his estranged wife, and two Chinese immigrants.

It is 1988, and Melo, a Uruguayan town on the Brazilian border, awaits the visit of Pope John Paul II. Numbers begin circulating: hundreds of people will come, no thousands say the media. To the poor citizens of Melo this means one thing: pilgrims in need of food and drink, paper flags, souvenirs, commemorative medals. Brimming with enthusiasm, the locals not only hope for divine blessing, but above all for a small share of material happiness. Petty smuggler Beto is certain that he’s found the best business idea of all: “The Pope’s Toilet”, where the thousands of pilgrims can find relief.

The princesas in the film are two prostitutes: Caye, who is saving for breast implants, and Zulema, who is saving money to send to her family in the Dominican Republic. The two women ply their trade on the streets of Madrid.

The story follows a group of men who will be marrying in Spain’s first same-sex wedding ceremony, and their mothers, who will be attending.

Residents of an enclosed neighborhood in the middle of Mexico DF are shocked by a violent crime, and for one resident in particular, young Alejandro, the drama is ratcheted up when he encounters the lone kid who escaped the event and is hiding out within the neighborhood’s borders.

The ticket price for the whole night is just 720 HUF. Tickets are available from 12th of April in the Apollo Cinema.