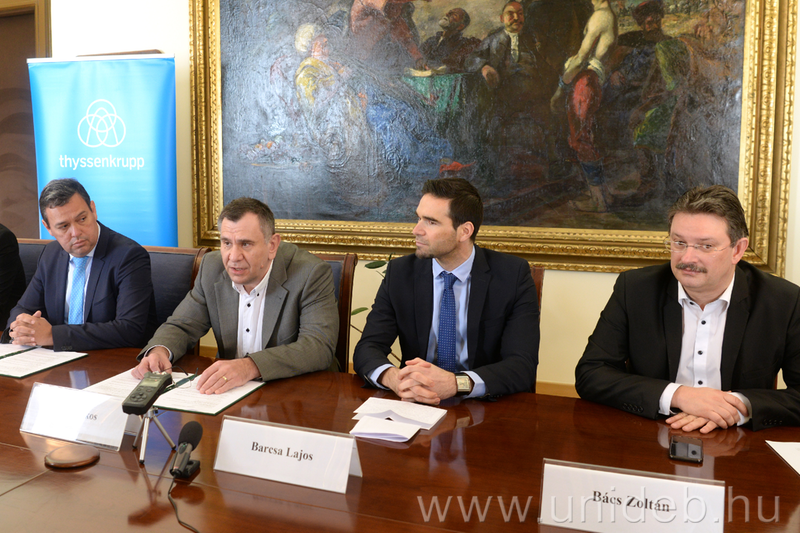 Representatives of the University of Debrecen and the German thyssenkrupp Components Technology Group, who are to establish a new plant in Debrecen, signed an agreement on cooperation in education and research on January 22.

“In addition to its traditional profile, based on studies in medicine, agriculture, arts and sciences, the University of Debrecen intends to follow the labor-market demands of its immediate geographical region as well as its own strategic objectives by establishing a high-quality program in engineering and technology in order to become the center of engineering studies in Eastern Hungary. Signing this agreement with thyssenkrup represents a decisive step in this direction and effort. It is important to note that the German company regards the University of Debrecen not only as a training location or as a source of labor. The agreement also covers research and development, and they also count on our institution as a resource of innovation,” said Ákos Pintér, Vice Rector for General Affairs of the University of Debrecen, on the occasion of signing the agreement on January 22.

Ákos Pintér also underlined that the joint work and efforts would involve future graduates in information science, mechanical engineering, and electric engineering, too. The vice rector added that he hoped that the German group would also chip into the various forms of dual education in the future as well.

Marc de Bastos Eckstein, Managing Director of thyssenkrupp’s Budapest-based electronic and software development competence center, noted in his address that the primary objective of the cooperation was to support students in Debrecen enrolled in engineering studies.

“This will result in a win-win situation for both the university and our company. The local plant of thyssenkrupp will get highly qualified and strongly motivated young employees, while the future graduates will get a chance to put their theoretical knowledge into practice when trying to solve specific problems,” said Marc de Bastos Eckstein.

The managing director also added that technical and engineering sciences would always remain a priority for thyssenkrupp. As an active participant in the world-wide marketplace, they can clearly see the importance of the unity of industry and education, which is why they intend to work together with the university in Debrecen, too.

The company has launched a new investment project with a total value of close to HUF 11 billion in Debrecen, on an area of approximately 100,000 m² where, starting from 2018, they will be manufacturing more than six million coil springs and stabilizers per year, creating 250 new jobs in the city.

Vice Mayor Lajos Barcsa believes that this cooperation could be just another example of how well and flexibly the university can handle the demands and expectations of the relevant industries.

“At negotiations about any future investment, it is always a significant competitive edge and advantage that the municipal government and the management of the university can display such a convincing combination of a single solid platform of cooperation. The degree of competitiveness of the city of Debrecen is significantly influenced by this joint representation of shared interests as well as by the outstanding quality of higher education available here.  It is a great pleasure for us to see that the strategic plans and the development principles concerning the programs in engineering are in perfect harmony with the economic development endeavors of the local government of the city of Debrecen,” said Lajos Barcsa.
The Vice Mayor also highlighted that the engineering industry, with its HUF 100 billion revenue, was the sixth most significant branch of industry in Debrecen. There would be, however, even more impressive prospects ahead of it, as the past few months have witnessed the appearance of several new prestigious actors on this scene, including the companies thyssenkrupp, Krones, and Intertanker.

The agreement that was signed on Monday covers the support of education development connected to automotive systems, the delivery of several series of lectures, the provision of locations for practical training, and close cooperation on a variety of projects and work on academic theses. In addition, thyssenkrupp would also make a number of positions available specifically for students, where they could participate in actual research and development activities.